So the World Cup was a bit of a noisy disappointment, but Read Dead Redemption saved the summer hiatus by having, in inimitable Rockstar style, quite possibly the best achievement ever.
I'd been aware of MonoXna for a few years, and had always known it as a dead project, so it was with some surprise that I saw that it had been quietly resurrected with some recent code submissions. I spent a good amount of time with it and had mixed results.
The good news is that I was able to get XAGE up and running after a few days. Similar to how Silversprite works, MonoXNA allows XNA games to be run without any dependency on the original Microsoft framework, allowing you to target new platforms (most notably Mac & Linux, and bodes well for future projects like MonoDroid).
The bad news is that neither audio or Texture2Ds seem to be fully supported. I'm sure it's possible to workaround some of these issues and I'll return to MonoXna again in the future when I have more time. Silverlight continues to be the secondary focal point for development. This is because playing the games through a web browser is still compelling and novel enough to devote time and effort to, and also because it's easy for me to develop & test. I don't currently own a spare machine for a decent linux distribution (and lack the space for a dual-boot, or even a large enough usb stick for ubuntu), and also I'm too perpetually poor to afford a Mac. Also, MonoDevelop curiously runs like dirt on my netbook.
Work has now finally been resumed on XAGE proper; my evening was spent adding support for running animations backward. This was to enable the little tramp in Ben Chandler's '!' to animate correctly: 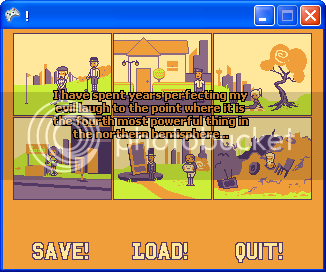 I'm using this game as a test case to help me figure out a workable design for arrays, which will help when I go back to TGP. Incidentally, Zombie Cow's game for Channel4, Privates, has been released and bucks the trend of most edutainment titles by actually being rather spiffy.
Posted by Clarvalon at 10:04

Support for backwards animations is great, a lazy little time saver that I use all the time!

Support for arrays will also be awesome - they are rad indeed!

! is the best Robot Rap game I've ever played.

And to think I thought I was the only one catering to the robot rap niche!

Though Cyborg Crip is totally my chromeboy, so I'm cool with that.