I've had a few pieces of genuinely useful feedback so far. One suggestion was to allow developers to enable or disable each individual action as and when they're needed (much like commenting out code), which hadn't even occurred to me previously.

After adding this functionality, I then realised it would be handy to be able to annotate scripts with developer comments, so added that too. To add an extra layer of flexibility I decided to finally implement Nested IFs, meaning it's now possible to create more complex conditional logic: 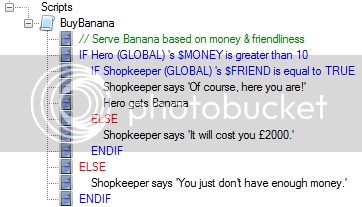 So, XAGE scripts looks more and more like real code, but it's still verbose and simple enough for anyone with eyes and half a brain to understand. The only typing required is for the dialogue and occasional object value.

Another improvement has been to add WalkLines, which are similar to WalkBoxes but only have two points rather than four. This was already achievable, simply by making two points the same, but having this additional construct should make it more immediately obvious to developers about their use. There are now also more visual cues when placing any walkable areas, so you can more easily detect horizontal or vertical alignment and connections.

I'm still a few months away from ramping up the PR machine as we get closer to v1.0. One thing lacking so far is bug reports - I've only ever received two. I'd love to believe that XAGE and XAGE Editor are watertight applications but that simply isn't the case. If anyone encounters any fatal exceptions, please let me know (there's a big friendly button that does it automatically!).

Finally, I've pestered Ben304 into letting me use some of his artwork for my DBP entry. He's a well-known man about AGS-town, so if you haven't taken a look at his short games Annie Android or Shifter's Box, do so.
Posted by Clarvalon at 09:57