Regardless of what you may think about Zynga, the numbers reported to be playing FarmVille are astonishing. This is due, in no small part, to the viral manner in which the game is distributed via Facebook.
I spent the morning having a quick look at the Facebook API when it suddenly dawned on me - Silverlight Applications (and therefore games) are supported. A few hours later I'd been able to set up a quick test App using the latest Awakener build: 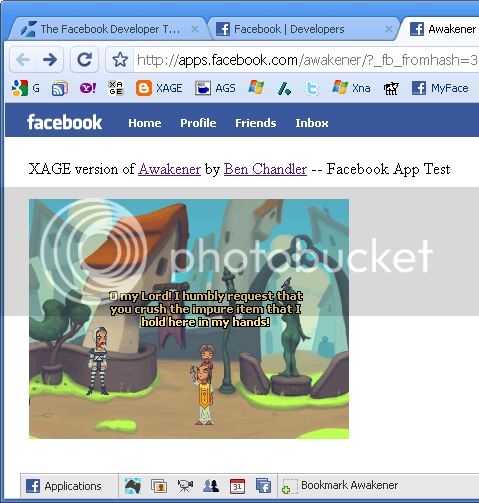 Note: The App itself has not been submitted to the Facebook Application Directory and it is linking to the game via a local host, but it's pleasing how simple this proof-of-concept has been.
There's a lot of potential with this. It could be used as a means of distributing a demo and raising awareness for a commercial game, or it could be used to give freeware games a larger audience (with, perhaps, a paypal donate button attached to the app). Or there could be integration with Facebook Credits e.g. reach a certain level and you need to cough up to keep playing, similar to the Xbox Indie Trial system.
Chances are I'll need a new 'Publish to Facebook' option in XAGE Editor.
Posted by Clarvalon at 17:16

Would be cool to see this in action :).

Wow, that's really interesting. A lot of potential in that for indie developers. How possible/easy/hard is it to get an XNA program working in Silverlight?

Using the Silversprite library, it's not too difficult, though there are some limitations - no 3D, shaders etc. There's also a lot of little architectural differences, like using IsolateStorage for save files. Performance isn't as good compared to native Windows or Xbox, as you'd expect, but it's more than adequate for most hardware.

Sounds like it has solid potential. I mostly work in 2D anyway! I had a look at the Silversprite website and it looks really interesting. Thanks for the info :)